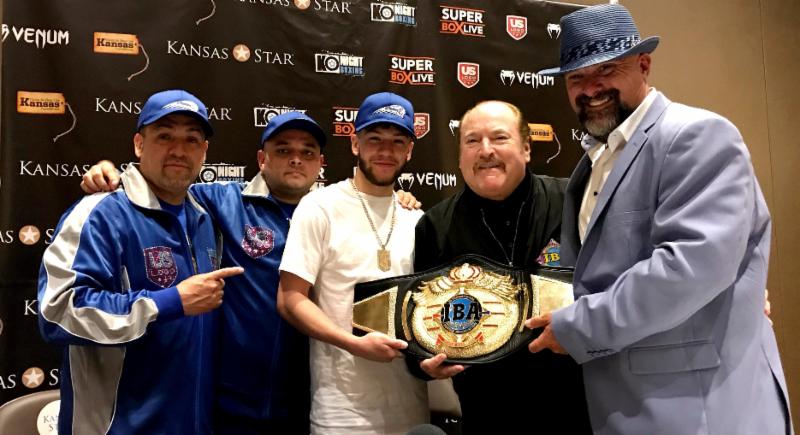 MULVANE, Kan. (May 21, 2018) — History was made this past Saturday night on the “SUPERBOX LIVE: High Stakes” pay-per-view card, when 2016 Olympic bronze medalist and local hero, Nico Hernandez, knocked out Hungarian challenger Szilveszter “The Silent Assassin” Kanalas in the opening round to capture the vacant International Boxing Association (IBA) Flyweight World Championship in only his fifth professional fight, at Kansas Star Arena in Mulvane, Kansas.

Integrated Sports Media distributed “SUPERBOX LIVE: High Stakes” in the United States on cable, satellite and digital pay-per-view as it was live-streamed worldwide on FITE.TV app and website (excluding Canada).

Hernandez was aggressive from the opening bell, pounding Kanalas’ head and body. A Hernandez left hook to the body really hurt Kanalas, who went down from a right that followed the vicious liver shot. Kanalas beat Hall of Fame Steve Smoger’s count, and it was only a matter of time before Hernandez would end the fight. It came soon, right after another body-and-head combination put the over-matched Hungarian on the mat for the second and final time.

“Nico was explosive Saturday night and he showed killer instinct,” promoter John Andersen commented. “He was going to box, but I think he smelled fear, and Nico got into Kanalas’ head. He sensed it and jumped on him.”

Before he left the ring, Hernandez took the microphone in the center of the ring and called out three-time Olympian and two-time Olympic bronze medalist, “Irish” Paddy Barnes (5-0, 1 KO), who was the favored to win a gold medal in the flyweight division at the 2016 Olympics. He was eliminated in the round of 16 and Hernandez took home the bronze medal. “There’s a bronze medalist from (Northern) Ireland, Paddy Barnes, and that’s who I’d really love to fight.”

“I think that’s a fight we should start a conversation about,” Andersen remarked. “It’s not line Barnes is 21 (he’s 31) and I don’t know of a lot of 30 or older flyweights. It makes a lot of sense and can be a big fight. They’re both Olympic bronze medalist, already fought in scheduled 10 and 12 round fights, and have belts. (Barnes is the WBO Intercontinental flyweight champ). Nico needs to step up in terms of competition, too. I think they should get in the ring and then we can see what happens.

“If they don’t want to make this fight right away, maybe we can build it up by putting them on the same card, and then fight next year. This fight makes a lot of sense for both fighters and Nico has already said he wants to fight Barnes.”

Undefeated Washington featherweight Victor Morales, Jr. (9-0, 5 KOs) was too much for David Berna (15-4, 14 KOs), of Hungary, who complained of an elbow injury and lost by way of a second-round technical knockout, in the televised opener.

In the television swing bout, which was held prior to the main event, popular Wichita junior welterweight Jeff Strum (3-0, 2 KOs) kept the train rollin’ with a second-round knockout of Nigeria-native Archie Weah (2-11).

In the most competitive fight of the night, as well as the lone match that went the complete distance, St. Louis cruiserweight Leroy Jones (3-3, 2 KOs) won a four-round unanimous decision over Kansas City, KS favorite Chris Harris (2-3-2, 2 KOs).

Canadian fight fans can contact their local cable provider to subscribe to Super Channel and all that it offers, including premium series, movies and much more, for as low as $9.95 per month.
Venum (www.venum.com) is the official gloves and apparel provider for SUPERBOX LIVE.

Super Channel’s mission is to entertain and engage Canadian audiences by providing a unique and exclusive entertainment experience. With a core foundation of integrity and accountability, we dedicate ourselves to implementing innovative programming strategies and unparalleled team work that provides viewers with exceptional value and variety.