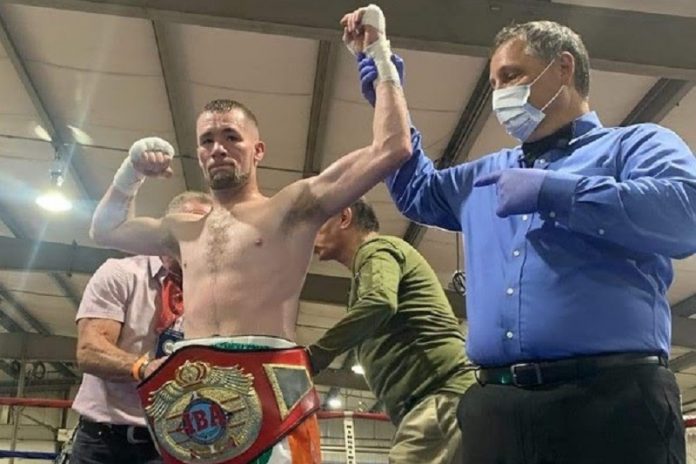 After the second installment of the popular “Battle of the Fairgrounds” series, presented by Gionta Management, Conway (19-2, 8 KOs) proposed to his girlfriend (Melissa Norton) in the ring, and he was a winner then as well.

“We had a great event last night that I couldn’t be happier with,” promoter Derek Gionta commented. “Everyone performed well, and we will be back in the Pittsburgh area September 18th with some exciting new additions to our roster.

“I’ve said many times and I’ll say it again, Pennsylvania is one of the best states in the country for boxing. Our aim is to continue putting on competitive match up for the fans.”

Hall of Fame referee Steve Smoger was the IBA supervisor at ringside.

“I wanted him out by the sixth round, and I reached my goal,” a happy Conway said after the fight. “I thought I did a pretty good job. I was a little tentative, hesitant at first, because I wasn’t sure of his power. But then I got more comfortable, digging the body, and breaking him down. When I started feeling my groove. I started landing my big shots. Next up is the IBA World title, hopefully, in January. I want that next!”

Pittsburgh’s crowd-pleasing super middleweight “Pretty” Richie Cantolina (7-0-1, 3 KOs) exploded out of the corner and thoroughly dominated upset-minded Darryl “Dream King” Bunting (4-10-2, 2 KOs) in the co-featured event. The popular Cantolina, a former mixed-martial-arts fighter (12-8 as an amateur), exploded early in the opening round, decking his opponent, and then finished off Bunting when he dropped him later in the first round.

Ohio super featherweight Ryizeemmion “Humble Beast” Ford (5-1, 3 KOs) cruised to 4-round unanimous decision over late replacement Ryan Venerable (2-5). Ford’s consistent jabbing kept Venerable at a distance, eventually trapping ed Venerable on the ropes and unloading a barrage of punches to the head and body. Ford scored a knockdown in the fourth round, but Venerable survived to go the distance.

The Fight of the Night was an entertaining 4-round match between Pittsburgh’s Deon “The Blood Hound” Goodlow (2-3,) and Ivan “The Hurricane” Hernandez (2-5-1, 2 KOs). Goodlow won a 4-round majority decision in a match contested at a 152-pound catchweight. Goodlow picked his spots, successfully setting everything up with his jabs, but Hernandez came on strong towards the end of the fight.