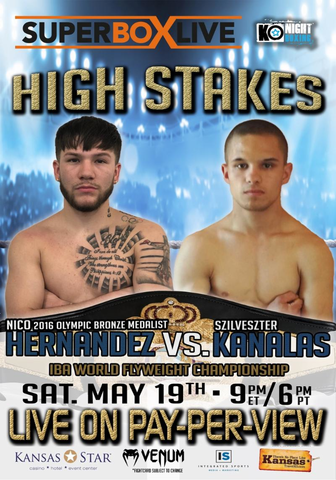 Wichita-native Hernandez captured a bronze medal at the 2016 Olympics. Two years ago, Kanalas became one of the youngest (17) world champions ever, when he defeated fellow Hungarian boxer, Jozsef Ajtai, for the vacant World Boxing Federation (WBF) Super Flyweight World Championship.

Additional bouts will soon be announced for the televised portion of the May 19th event.

Integrated Sports Media will distribute SUPERBOX LIVE: High Stakes in the United States on cable, satellite and digital pay-per-view via iN Demand, Vubiquity, DIRECTV, DISH and live-streamed worldwide on FITE.TV app and website (excluding Canada) for a suggested retail price of only $19.95.

To watch SUPERBOX LIVE: High Stakes live in Canada, showcasing undefeated Canadian heavyweight Teslenko, as well as more exciting boxing to come in 2018, fight fans can contact their local cable provider to subscribe to Super Channel and all that it offers, including premium series, movies and much more, for as low as $9.95 per month.

We have had tremendous success over the last two years airing live boxing on Super Channel from around the world, said Don McDonald, President & CEO of Super Channel. This is why we felt on top of continuing to acquire events, we would start working directly with promoters. We have co-created the SUPERBOX LIVE series to further demonstrate Super Channel’s commitment to create original content that we can air and distribute worldwide.

Media executive Mike Garrow, who is the co-creator of SUPERBOX LIVE, has been appointed executive producer of the new series.

Events that fans will watch on SUPERBOX LIVE will showcase stars of tomorrow, as well as feature established fighters from around the globe, Garrow commented. Our series shows will take place in venues throughout North America. We look forward to working with various fighters, promotions, managers, and sanctioning bodies to make SUPERBOX LIVE a ‘go-to’ show for fight fans.

Super Channel’s mission is to entertain and engage Canadian audiences by providing a unique and exclusive entertainment experience. With a core foundation of integrity and accountability, we dedicate ourselves to implementing innovative programming strategies and unparalleled team work that provides viewers with exceptional value and variety.