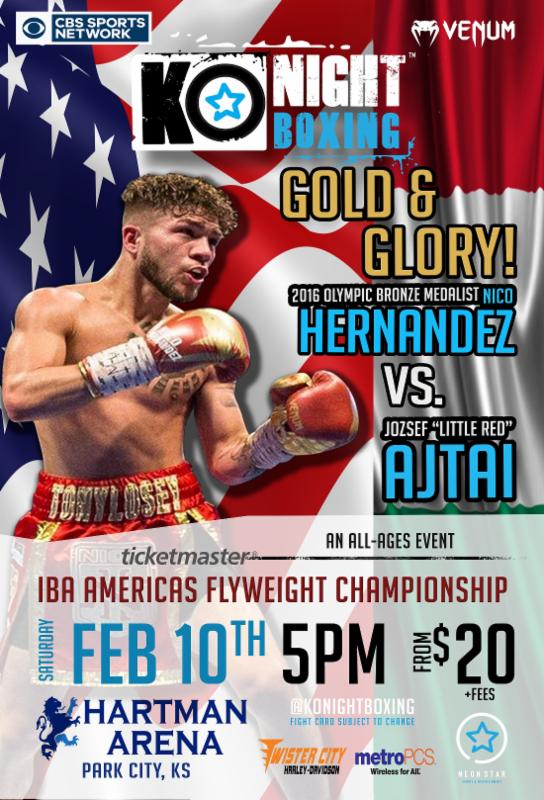 The action will be taped live for future airing on CBS Sports Network.

The 22 year old Hernandez (3-0, 2 KOs), fighting out of Wichita, suffered an undisclosed injury that forced him to withdraw from the Dec. 2nd fight. Neither Hernandez nor his promoter, John Andersen (KO Night Boxing, LLC), have revealed any details about Nico’s injury to avoid giving his opponent any possible advantage to target in the ring.

I feel good, ready to fight, Hernandez commented. ” We wanted to make sure that I was injury free and I am 100-percent. I’m going to do whatever is needed to win this fight. Fighting for my first title means a lot to me. I didn’t think it would happen this fast. I want everybody to see that I can be competitive with the best in my division. A win February 10th 2018 will get me there a lot closer. ”

” My opponent like to runs a lot and he’s quick, so I need to have my legs under me. Other than that, though, I should be okay. He has fought some good guys. I can’t wait to get in the ring in front of my fans. ”

Ajtai (19-9, 12 KOs), who is one year and six days younger than Hernandez, has already fought in five title fights. He also went the full 10-round distance, albeit in a loss by decision in 2016, to two-time Olympic gold medalist Shiming Zou, the former World Boxing Organization (WBO) flyweight world champion. Fighting in his opponent’s hometown isn’t a problem for Ajtai, who has vast road experience having fought as a pro in the USA, United Kingdom, Spain, Germany, Ukraine and Slovakia.

Nico will not know where I will be in the ring, Ajtai predicted. ” When he looks to the left for me, I will go to the right; when he tries to find me on the right, I will be on the left. When he wants to rest, I will come forward punching; when he wants to punch, he won’t find me. ”

” I have a plan for this fight and I’m sure he does as well. But, in the ring, only one fighter’s plan can succeed. It’s going to be a good fight, but I can’t promise the public that Nico will be the winner. ”

” I’m excited that Nico is 100-percent healthy for this fight, Andersen said. We couldn’t be happier to bring this great fight, and many more as we move forward, to the great city of Wichita. ”